As I was cleaning today, I ran across an envelope that I was about to toss. I opened it up (it was addressed to me) and the first page was The Caregiver Bill of Rights. Rights that I was supposed to hold to as best I could while caring for mom. While reading it over, I realized my caregiving isn’t over. I alluded to this in The Long Goodbye, but damn it! I am still taking care of mom at the cost of my own life. I leave Alaska in a bit over a month and, in a small way, I’m glad. I have a ton of crap to go thru once I get to the states, but at least it is crap I’ve already sorted once. Stuff I can decide to sell or keep or recycle into something else (like the sweatshirts made for mom and dad with handprints from the grandkids. Jake doesn’t want them and suggested garbage.). As much as I love and need to be here, I’m so sick of waiting for things to happen or opening up a closet and discovering I hadn’t emptied it yet. I am going to do that next week. Just empty closets and take stuff somewhere. I’ve been doing it slowly cuz there is such a clothing glut in the few stores we have. I have cookbooks I’m taking in and the most frustrating part is storing it to haul off! (I do not like clutter and piles for this and piles for that makes me want to just walk away! Note: That is an ELO song from ‘Xanadu’. Fun musical! Gene Kelly, ONJ, and some random dude that apparently roller skated in from somewhere.) I need to make some more cash before I leave in October. I am sure it will show up from somewhere. It is obviously NOT going to be made this fall from selling these things.

The lake is gorgeous this month. In between raindrops, it is frequently calm and often glassy. I haven’t seen the bulls lately. But, it is still moose season for a few more days. I wish the guys would just bed down in my yard and hide out! Others are scared of the critters, but if you don’t bother them, they won’t bother you. (Generally!) I had to laugh last week. The neighbor’s dogs ran to the lake edge barking like crazy. I figured there was a moose around and walked down with my camera. A cow was on my side, not very close, but I got her photo. The dogs continued barking and two of them were wagging their tails. I think they wanted to play! There are still loon, I hear them often and I just looked up to see a flotilla of mallards paddling past. Last night, I was out on the water and spied three golden eye. (Oh, I just noticed there is a single out there on the water! Poor baby. He doesn’t fit with the others, but there is probably safety in numbers. Picture is of golden eye diving-)

Speaking of mom and this incredible place, when her ashes were put in the lake after the sale, no one took photos and the single picture I thought I took, didn’t take. It is sunny at the moment, Jake isn’t due to be here til after one … I saw her briefly at a party we were both at, but otherwise I have not seen her since the sale. She called to say she needed her folding tables. Tables that when she left were covered in things that needed put away. Which I did. There is still a lot to tidy, but I’ll do it when the drive is getting dug up. (yes, it might really happen the end of this week!!!) BUT, the lake has been beautiful, so I am going to wait for someone to visit, do ashes again, and have the person take photos of the experience. (Hoping the whomever will visit when it is daylight, not raining, and the lake is calm!) I won’t do it when Jake is here, she’s too busy. (she has arrived and gone again. She’ll see me probably around the 24th when we take the rest of mum’s ashes down the inlet) I’d do the photos myself, but the swirl of ashes will look better from up high. Or at least, I was told it looked interesting when it was done the first time.

I keep wandering off into bunny trails in this post! And I completely forgot to mention my busy Sunday or that I made the scrumptious halibut! (I am sure you are all waiting on tenterhooks to find out what I did.—Tenterhooks sound extremely uncomfortable!) Sunday I did sell some rolling carts that were stashed in the rig. (They take up a lot of room, I needed to move the carts and so, and I put them in the vehicle!) After church, I dashed off to the store, met a gal and then TnT in the parking lot and chatted, high tailed it to my next engagement, realizing I was not going to have time to put gas in the Pacifica, and got to the church anniversary in time to miss most of the service. (yup, after church, another church had an anniversary party at 2pm.) I sat with some stellar older folks and the majority of us left around the same time to attend a retirement party at 5pm. Where I sat with some of the same people (Jake was at this one, she sat elsewhere)! I love the people in this area! I learned ‘Poor man’s lobster’ is a delicious old fashioned way to cook halibut (since I didn’t have any clean forks, I used chopsticks to dip it in a butter that definitely needed flavoring), the icing on the cake I sampled (I like tasting how different people bake!) was ridiculous, and the donuts had WAY too sweet toppings on heavy rings. The desserts were very pretty, though! 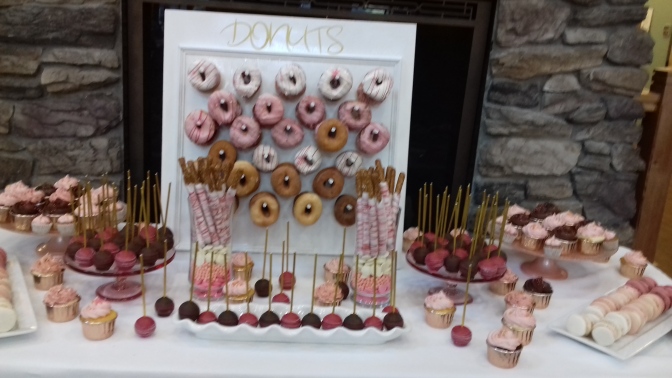 These last two pictures are ones The Craftsman took. He went to a car show this weekend with over 600 cars and found a 56 T Bird to match the 56 Mercury. How cool is that? A turquoise T Bird!!!! 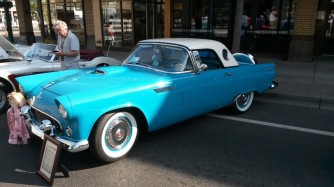 I have been thankful to thread many golden pearls on my string of memories the last couple of days. I’m going to need them to roll in my fingers when things are less bright.