This is another favorite song from a while ago. If I remember the movie correctly, it was one of the first ones to romanticize bad guys. As a teen, I fell in love with Butch Cassidy and the Sundance Kid, carefully mentally editing those scenes where they shot people who bled graphically! (in the photo below, raindrops weren’t falling at that moment, but you can tell from the sparkles on the fireweed that they had been falling!)

Mum’s SABLE (Stash Acquired Beyond Life Expectancy) sale has been completed. There was a good sized crew of amazing women (and a few men) who helped this all come together. I woke Saturday night wondering if it was really done! I must admit, I’ve been second guessing some of the things I did (like NOT putting the expensive priced knitting kits with the regular yarn. I am certain they walked off in bags of ‘choose your own price’.). And with the rain, I was worried about the fabric and remnants of the stash, left under tarps in trucks til Monday morning. (The latter was done by the nice people who came to get it for a second hand store.) Yet, it isn’t my responsibility any longer and I have other things I need to do! As for the yarn, as a friend said, ‘People come to these sorts of events for steals.’ (So, I reckon a few got some, like the pick up full of bags of yarn!!!) 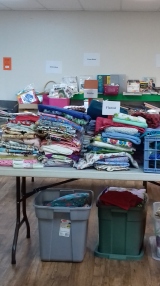 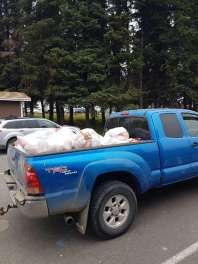 At 9 am, the doors opened and those queued outside came in and quietly packed up bags and bags and bags of crafting supplies. Some paid generously and others didn’t. I’m sure it all evened out (it was a donation sort of payment thing, except for those few things I knew had worth). It was odd the women with fancy nails, very nice clothing, and blinged out handbags were less open handed than others who dressed like ordinary folk. I’m glad it is done. Now, I can get to the real part of the house and it is so cool my bedroom echoes!!

When things were being unpacked before the sale, the ladies found some super awesome things and gave them to me. An Eskimo yo-yo (not made overseas!), some more of a ceramic chess set mum made that is in the shop of the garage (why it was in crafting stuff, one can only imagine!), and a million unfinished projects. I only cried a couple of times. Once when a nice lady offered to finish up a project and take the aprons to the Oncology centers (mum had been making them for the nurses, but didn’t count right. Now, the places have been partially restaffed, but it was a beautiful thing to choose to do). The first time was when a man came in with his wife and said to me, ‘I worked with your dad, he was a good man.’ I left the table and ran after him to talk about dad for a minute.

There were so many stories told to me about mum. (One lady I sincerely hope remembers to friend me on FB.) I’d mentioned I wanted to take mum to Homer and she was surprised mum had never been. I amended my comment and said, ‘Oh, we started there in the 70’s, but mum wanted to go back the last couple of years and we didn’t.’ The woman was very surprised cuz SHE lived in the same town at the same time we did and hadn’t known. I told her mum was pretty closemouthed about her early years in AK. We talked about where we’d lived and places we both remembered. Then, I mentioned we’d lived in an area of town that was pretty remote with my third dad. Her face was shocked. ‘Your mom was married to that B..….’ She paused. ‘Man? He was one of the scariest guys in out there! We were told to stay away from his place!’ I laughed and agreed, but she was floored.

One question that I realized the answer to Sunday morning in the shower was this. Q: ‘Why don’t you do any of these things.’ It dawned on me that I did not do the same sorts of crafts that mom did because she was so critical. Jake had trouble with that, I wasn’t going to even go there. So, I didn’t. She could guilt me for many things, but she couldn’t criticize me for my knitting or crocheting or sewing. Although, she did often say it wasn’t right I didn’t do it because if I did I could help her. (insert mega eye roll!)

These next weeks will be more difficult. I need to get the line dug up (or should I just keep having it cleaned out, expensive band aid?), talk to someone about buying it (gods, I do NOT want to do that…), and sort for the sale of more personal things. I also need to stop whining! If I get too horrible, please pull me up shorter than I already am. (thank you!)

I’ll close with a moose playing peekaboo last week! (I wasn’t THAT close–) 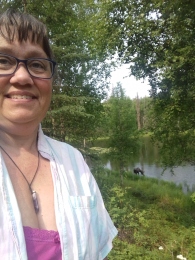 14 thoughts on “Raindrops are Falling on my Head”