Freddie was a tiny woman from England. (I wish I could find a picture of her!!) She and her husband, Roy, would often visit their daughter on the Oregon coast. I was blessed to have purchased their former home near by.  (Actually, our  houses were so close we were neighbors separated by a rickety pole fence and only seconds from each other!) She was shorter than my 5’2″, with an iron grey bun on the top of her head. When she let it down, her hair went past  her English buns. Roy was a few years younger and a million miles taller, she called him her ‘boy toy’. During WW2, Freddie was an air raid warden no one messed with.  When her daughter moved to the US, Freddie and Roy did, too. Then they left again only to be frequent visitors. When we met her much later, one of the things we remember best was her baking. Freddie’s scones and cheese straws (also known as twists or sticks) were only surpassed as favorite treats by her tasty fingers dipped in chocolate. (shortbread cookies, I think) I’ve always tried to recreate the cheese straws and my searches online seemed fruitless. Probably because I stopped searching after a few years!

After posting my last attempt on here, I had more recipes shared. However, I used the old cookbook version instead of the pastry puff one.  (I’m pretty sure Freddie never used anything refrigerated in her straws, except cheese!) Using Colette’s 1950’s find, I mixed and rolled and baked happily. The straws didn’t turn out the way Freddie’s did. (Perhaps she did use milk and baking soda…I imagine the old baking hand she was tweaked recipes to suit her tastes!) I didn’t quite get 50 straws, my cutting wasn’t entirely exact! But, what I ended up with were addicting and are almost gone in less than 24 hours. (I think I made 40ish of varying sizes) The bent straw in the photo above is because it twisted off the pan and was baking down against the side of the oven. (YIKES!)

I did need to find cup and temp equivalents to match the given recipe (silly Americans to not use the metric system~) and I ended up using a LOT of water to get the dough to stick, instead of the 4 TB. I was surprised at how little cheese was needed to make a cup of shredded product and it took a bit of time to cut the hard butter into the flour properly. I didn’t put in seasonings and that made the first pans of straws rather boring in taste. (I have powdered mustard on my list for next time, the other is in the cupboard!) However, as stated above, it was a win win experience when complete. Everyone I gave a straw to, liked them. The straws didn’t appear to mess up my glucose. Even the next day people snacked on them sans reheating. I will make them again with the proper seasonings inside the mix instead of  putting Mrs. Dash on the outside and try to recreate Freddie’s straws with this recipe…..and a few ideas I have. (I recall hers as being more substantial, not so skinny and fragile) 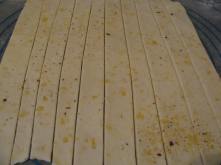 This recipe is why I love blogging. Connecting people to each other in words…and in flavors! Thank you to everyone who chimed in with their ideas and especially to Colette. Happy Baking Sigh!

6 thoughts on “Sticks or Straws On the Range”