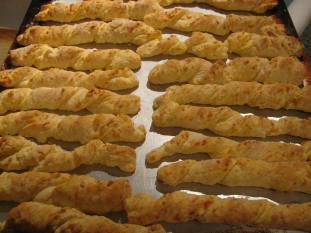 I have been not exactly busy…but well, walking upstairs to my laptop is a lot of work. The main desktop is often in use when the kid is home and I tend to have other things to do during the day, when it is free. (wow, that was a bit of a sentence!!) I need to get caught up on the blogs I read in my inbox and add the comments I think when I read them! Oh if there was a way to instantly add those comments…ok, maybe not!!! lol

One of the things I baked recently was an experiment. OK, not exactly, but somewhat of one. When we lived on the Oregon Coast, my neighbor’s mom would visit from England. She’d make these amazing crispy tasty cheese twist treats. She called them cheese straws and a few times she made them, her daughter and I would try to figure out her recipe. She was of the generation of a scoop of this and a handful of that and a pinch to make it taste better. Needless to say, we never managed to get her recipe. It would completely muddle her when she’d grab a handful of flour that we’d want to measure!

I looked online, but nothing ever quite matched Freddie’s. I’m afraid it is gone with her now, but I decided to try and make them again. I used my basic biscuit recipe (what Freddie called scones) and it was too soft. Little Bear called them twists and I suppose that is what they are! The straws were good, but not exactly right. I’ll keep trying and maybe less baking powder next time…..

19 thoughts on “Crossing cultures On the Range”