It has been ages since my last real post and I am sorry. I do follow thru those which show up via my email, but I don’t reply outside of my head! (and thus, no one gets to see what I am saying. Probably a better form of not communication….)

Since the septic saga, I cleaned and made mom’s house ready for someone else to stay in. (I did forget to put my shampoo away and get out the new stuff in the basement vanity.) I packed and repacked and sorted my own things to take back to Oregon. I did a million errands in that last week I wasn’t supposed to be there. The security system is in place and I ate some of my favorite things. (Except for Thai food, the truck closed down for the season a while ago!) Mom’s mail will be forwarded, the electric company is sorted, and Mittens got her travel papers (see link for that horrible experience!)

Packing was crazy. I am always very organized when it comes to traveling. I make a list days beforehand, including everything I might need. By the time I actually get the items in my bags, I have crossed off things on my list and often put the list in my bag. (TSA could use that paper to see what is in there, but they’d rather rifle thru personal belongings) This time, I had no plan. I couldn’t even find a plan! My lists were vague and I’d often start a task and stop in the middle confused. It eventually was done. Almost everything was eventually finished, but before that, it snowed. (I did dress for it later!)

I was so happy to have snow for my last weekend in Alaska. I even played for a while on Saturday night. Granted, it made a bit of a mess and I didn’t get to go to the church to say goodbye, but it was lovely. TnT and Jewel and her dad came to visit and help me on Sunday. The neighbor’s plowed (there was a lot of snow!) so we could have some ease in our movements. One of my security guys dropped in to get a key. My sister texted and it was decided she’d stay at home. But, I had celebrated her at a birthday gathering a few days before. I didn’t sleep well on Sunday, since I had to leave dark and early on Monday, but I managed! 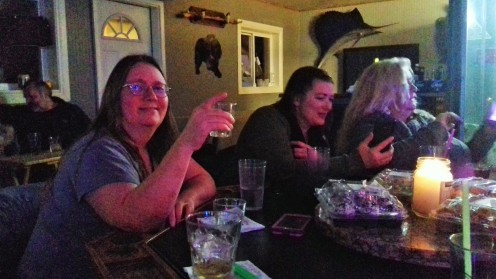 The next day started well. Nancy took me to the airport and regaled me with stories of flying with 4H chicks and laying hens to their fish site every summer. She told me about living in a tent with a cat when she first moved to Alaska and made me realise how much I appreciate a modern lifestyle. TnT met me to say goodbye and I didn’t have time to be as sad as I might have been normally. Mittens was no thrilled with the experiences she was having! (Travel with a full grown cat not used to it is probably similar to traveling with a teething toddler)

I was glad I’d packed a couple of breakfast bars, they compromised most of my food intake that day! I drank my last can of diet Pepsi in Nancy’s SUV, had one bar before the flight to Seattle (I also had a cookie I was given on the flight out of town), one during the flight to Seattle, and a half a glass of white wine from Seattle to the small town I was disembarking in.

I was met when I got off the tarmac by a grinning Little Bear and a smiling spouse. I actually got a whole hug from the kid (we are working on those) and The Craftsman lightly kissed me hello and put his arm around me while we waited for luggage. It was nice to not have to manage more than Mittens, my bag, and her empty cat carrier (we had two carriers by the end of the trip). At the rig, I climbed into the back seat with the cat and smiled. The last times I arrived back there were flowers. Not this time. Then, Little Bear mentioned they’d stopped for dinner at McD’s and had gotten me a hamburger. Since it was 730 AK time and 630 in the PNW and I’d lost blood and was tired, I opted to eat it while The Craftsman finished his own meal.

On the way to the house, they pointed out things that had changed in the last two years. (the roads in the next town have definitely been modified. I was glad to have a head’s up on that one!) At the house, I noticed that even though a great many things were different, many were the exact same. Mittens was happy to be released from her confines and I made plans to go shopping the next day. (I’ll continue with the story of this first week in my next post!)

Home is melting!!! The lake the neighbor’s skated on last Saturday is now rather wet! TnT sent me a photo and my nice frozen drive is a quagmire of muck. Any burglars who visit will get stuck!!!!!

9 thoughts on “Return to Oregon”