What has been going on? Well, I’ve learned this last week freedom isn’t free, that I’m helpless, this situation is hopeless, and it is absolutely crazy. Which is one of the reasons I’ve been such a bad blogger. (adding flowers from mom’s yard as the rest of the post is not as encouraging!) 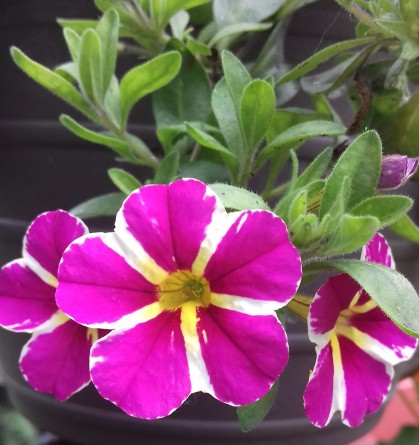 Mom is home. She’s absolutely as well as can be expected. It appears there was some bleeding in her intestine somewhere, but since her levels have all pretty much returned to normal in every way, no one can tell me how to stop this from happening again or why it happened. The nurses get annoyed cuz I ask too many questions that they seem to have already explained to me. I have discovered I need to keep my mouth shut and watch and hope to god someone says something I can understand. (I did call a good friend in a different office and she passed on some information to me that was incredibly helpful—she knows me, knows mom as a patient in their office, knows I have power of attorney, and she has access to the records the nurses decided I didn’t need to know. They told mom the information, instead of me. Which was moderately ridiculous.)

I did get sleep that night and some in subsequent nights. On Thursday morning I called the hospital at 8 am to get information and was told the nurse would contact me. I called again at 1030 and was told the nurse would contact me. I called at 1130 and was told the nurse had already talked to me. I explained she hadn’t and the nurse came to the phone. She said someone had come in and the information was given to them. I replied with who I was and that I was the person to tell things to. A bit later, my sister called and I asked if she’d seen mom that morning (cuz I figured it was her that the nurse had talked to). Nope, she hadn’t been in yet. I finally talked to mom and found out Jake had talked to a friend while working at the pool, this friend had an appointment at the hospital and decided she’d see mom, too. This friend is a bit older than me, tall, blonde, and calls my mom ‘mom’. Mom went with it and so, it appears I have a completely unknown sister. Anyway, I went in later and the nurse asked me who I was. I said I was mom’s daughter, Kris. In the general chit chat, she asked about my sister in Oregon. I blinked. It appears mom told her she had a daughter living in Oregon. All in all, I was annoyed and frustrated. Mom, on Thursday, had stabilized, but they opted to keep her one more day. (I was impressed at how well she looked. IV fluids are a great invention!!!!)

The next day I arrived before 8 am, I was going to be there to hear what was said. They were talking about releasing mom. But, they wouldn’t know for sure til the afternoon. I decided to go back home and return later. (Remember this is at least a 30 mile trip one way with a lot of road construction that has just started). I get to the room and find mom has decided she wants to stay one more night, they let her. I eventually left after my sister came to visit. She was there twice. It was Friday, I couldn’t do anything I wanted to do, I decided to get take out Thai food. I forgot they move to a different locale on Fridays. I just went home, screamed at God most of the way, and had leftovers. I talked to The Craftsman for about 15 minutes, showered, and pretty much felt sorry that my freedom wasn’t freeing. (I did spur of the moment paint my toenails and drive back to town late. There I walked in a park I’ve not walked in since 2014—it was dedicated to a boy from my graduating class and got real ice cream. I have also pulled the hide abed out to sleep on.)

Saturday, I was so tired. I drank a whole rockstar in one go and kept yawning and it didn’t do anything at all for me. I also stopped at McDonalds and thought of Becky as I watched people order their breakfasts. (no one threw any cups, it was rather dull!) Mom was told she could leave at 830, but the paperwork, and whatever else was going on, took ages. She wasn’t released til almost 130! At the hospital she was weak and seemed so sick. She was concerned I wasn’t going to be able to drive cuz I was tired, but we got here! The minute we got home, she hobbled out of the car and wandered around the yard without her cane and did all sorts of things she probably should not have done. Her choice and I’ll deal with the consequences, as usual. She even made note of the dish I’d left in the sink that had the remains of ‘something good’ on it.  She had planned to attend church, but guess what? Nope.

Sunday arrived and I was dressed to go, mom was in her jammies on the couch sleep/reading. (It takes her weeks to read books she used to read in days.) She did use her cane to go outside on Sunday. She also wanted to know if I’d gotten the paper yet (she hadn’t read the last several and the only reason I got them is cuz she was gone. Usually, she feels she can do it herself). I did go and retrieve it after lunch, mom…she didn’t know I’d told her I’d picked it up and was going to do it herself. She was annoyed I hadn’t told her.

I was sitting in the basement wondering why I was so frustrated. Then, I realized it is because I’m by myself and this is hopeless. (I’m told God isn’t finished with mom yet, or that mom has something left to do, or any number of reasons why there is still hope. I’m not buying it.) Mom is in horrible pain. Mom spends her days reading and sleeping and watching tv and sleeping and going outside now and then for a few minutes at a time and sleeping. (She’s hasn’t started using the second Ritalin tablet to keep her partially awake yet.) She rearranges her clutter and talks on the phone. She attends appointments and tells them how great she feels or how good things are going. She tells them about the projects she’s working on (barely started and nothing even close to finished) and how she can’t wait for me to leave her. She says I need to have my own life back. Her pain doc and her primary doctor know she can’t be alone. They know she’s just talking. But, all we can do is wait in a hopeless, helpless situation where her stats remain normal and a tumor grows slowly.