It is easy for me to fall down the hole of never ending darkness. I hate to bother people. I don’t want to be in the way. I’m not as strong and independent as I need to be. I try and I pretend, then I hide in my blankets and cry. I’ve gotten texts and messages from good friends, they have been beyond helpful. I don’t like to initiate, though. I do that too often!! I often wonder if anything really matters.

After reading a blog I follow, I decided to call The Craftsman. (the blog had ideas on how to encourage others or yourself and suggested calling someone you hadn’t talked to in a while) Since I last spoke to him on the 11th, I thought this would be a good idea. It was!! I got to talk to him for almost 17 minutes on the 16th. (he was also talking to Little Bear, so I listened for a while) He even texted me twice Saturday night when they were watching a movie at the house and twice Sunday morning during praise team rehearsal at church. He also called me on Sunday for 20 minutes!!! He’s a lot busier than I am, so it was nice to hear from him so many times. I had to laugh, though. Not only is the sewer pipe from the house blocked (probably tree roots), but his mom’s hot water has been leaking for months and she didn’t think it was  important. (he sees her every single night for at least 30 minutes and yet, she forgot to mention it!!!)

The satellite tech came out on Sunday. He got lost. I do wish people would stop trying to use GPS to find mum’s house. They should just call and ask how to get here. (I do fairly well with directions, as long as I remember my rights and lefts!) Mum’s health nurse got lost again last week. The road exists, but most of the time it isn’t navigable. It is sort of now, because a company is putting in a new pipeline and they have needed to doze for the trucks to haul in the pipe. However, it is really best for a 4 wheel drive!! Anyway, the TV tech, (bless his heart!) said the contraption that came is not really necessary for television in Alaska. He also said he wasn’t keen on clambering thru hip deep snow to reach the dish, nor would it work on the dish in the yard. He didn’t want me to try toshovel to get to the dish, it is in the middle of downed trees and brush! He suggested we keep the contraption and he’d return when the snow was gone and he’d move everything to mum’s roof and we’d not have a half acre of cables strung thru the trees and moss. (there are at least 3 or 4 black cables from the two dishes to the house, some might be spares.) He also said to not call the main number when the yard was clear. I’ll stop by the office and let them know in person.  Mum was sort of mad at me, I didn’t let her talk much to the guy who came. She thought she knew him (he grew up in a town much further away than any of the ones mum has taught in) and I was trying to help him get in and out and be done!

My sister called. Actually, she called a couple of times. She and my niece were gone this last week (they were sick, but had paid for a convention sort of thing for FFA and were determined to go). At the end, awards were given. My niece got one for leadership. So, she called her Nana to tell her. I could only hear mom’s side of the conversation. ‘You got an award for leadership? What did you do? Why did they give you the award? Did you build a snowman? They had to give it to you for doing something. You don’t know? Well, I’m glad for you. I have your birthday present here. When do you think you can come and get it? Are you staying the night up there or coming back? Well, be safe.” (those sentences were interspersed by blank moments where my niece was trying to answer!) Jake called before the tech guy arrived to say they were back, pretty wiped out, and still sick, so they were not planning on coming out for a while.

I hear mom whimpering and forcing herself to do things because her hands hurt. She insists it is the weather or the time of the day.  She is not admitting to pain anywhere else. She’s trying to stop taking pain meds, although she will. Thankfully, she writes it down when she does. She gets mad at me when I praise her for how well she’s feeling. She did ask me to remove the cap from a needle tip today. I also replaced it. The sharp part was bent over flat. Mum said she got her insulin, it bent when she pulled it from her skin. (I’ve tweaked needles-rarely-putting them IN my body, I’ve never bent them during removal.) She’s not sleeping much at night. I’ll hear her say she’s going to bed, the tv will be on and lights will be on til around 2. Then, she goes to her room and turns on her oxygen, if she hasn’t already. She then gets up around 4 am and again around 6 and then again at 8. Sometimes she takes meds, not always. She might be snacking. I don’t know. I let her do what she wants. She desires independence and so, I’ll give it to her. She did say the other day how it was nice having someone here. (As long as it is her older daughter who lets her do whatever she wants, for the most part.) She has paperwork due at the end of the month, she has had it since January. She says she’ll do it and I keep moving it to make sure it is in sight. I can’t do it for her, or I would. She wants to be in charge of her finances again. (I’m not keen on the idea. But maybe I should.) She is glad the days are getting longer and goes outside often. She won’t wear a coat because it is 35 degrees. (I’ve slipped and will wear my jacket. Sometimes I even zip it up, but she says it is because I don’t live here anymore and I’m not used to the weather.) She goes through short spurts of vigorous activity followed by long periods of non-activity during the day. We see a radiologist Monday so she can get a second opinion on her being incurable. Maybe someone can do surgery to remove the abdominal tumor, she managed to fly through the one for teeth and the pain pump one. Not sure what they would do with the tumors in her lungs. Tuesday they will do something so she can get some new teeth sections.

I’m just going to ferry her to the different appointments and read The Secret Garden. (pictures from pear trees in Eastern Oregon March ’15) 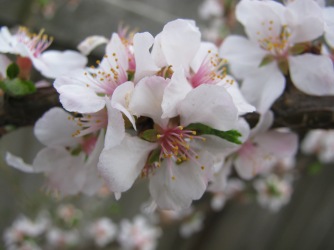